The Valluvar Kottam Chennai was one of the most popular monuments of the city. It is situated at the intersection of the Village Road and the Kodambakkam High Road. On our way, we munched on light snacks that we had brought with us and also shared it with our driver. We also chatted a lot and shared our views regarding the places we have visited so far in Chennai. The Valluvar Kottam was built in the memory of the great Tamil philosopher, poet and saint Thiruvalluvar. This monument was built during the tenure of M. Karunanidhi in 1975-76. Thiruvalluvar lived almost 2000 years ago and one of his most important pieces of work is the Thirukkural.

The monument is constructed like a chariot in a temple and it resembles the chariot at the temple of Thiruvarur. Thiruvalluvar stands on the chariot in the form of a life-sized statue. The complex was very well-maintained and the weather of the place was comfortable. The staff members at the monument were very diligent in their work and it was evident. V.Ganapati Sthapati was the architect of the statue and he built it in the South Indian architecture. He has also built the statue of Thiruvalluvar at Kanyakumari. There was a huge auditorium in the campus, which could hold a huge capacity of 4000 people. There was a cultural programme going on in the auditorium when we visited it and so we watched the programme for a while. It gave us an idea about the heritage of the Tamil culture. 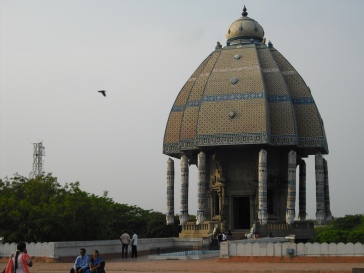 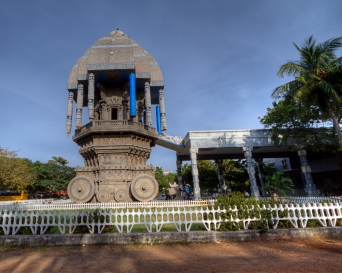 We read extensively about the life of Thiruvalluvar on the wall magazines. The great poet was born some time between the years 1st Century BC and 8th Century AD. The most important piece of work of the poet, Thirukkural is a guide for human beings on moral values. Ethical code of conduct and the right way of doing things is also beautifully explained in this work. It has been widely translated into a number of languages. We really enjoyed ourselves being at Valluvar Kottam Chennai and then left for the Semmozhi Park, the last destination of the day for us.

Hello, This Afreen from Andhra Pradesh. I am a regular girl from Hyderabad, an account executive by profession. I love my job but sometimes it gets a bit monotonous so I take breaks and plan short trips to places that interest me. As much as I love hanging out and spending time with my family, I also have a creative personality so often make time out of my hectic work schedules to check out popular and recent plays, movie, and dramas. Through the Blog of mine, I want to share my experiences, knowledge, and life with you people. Hoping you would love my thoughts.